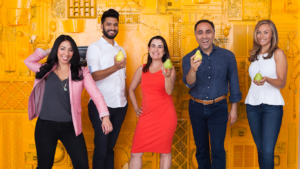 Likability, intuition, and a strong work ethic is a potent combination in any business, and many in Silicon Valley think seed-stage investors Pejman Nozad and Mar Hershenson have all three in spades. They “complement each other,” says investor Alfred Lin of Sequoia Capital, who invested in the Series A round of DoorDash, the restaurant delivery company, after they seeded it.

Indeed, the duo has already become somewhat for working closely with nascent teams — many of them in their backyard at Stanford — and vetting them for other VCs, who appear to have an open invitation to their modest offices. (This editor has spied many an investor milling about during different visits, including Bryan Schreier of Sequoia Capital, Mike Abbott of Kleiner Perkins Caufield & Byers, and Brian O’Malley of Accel.)

Nozad and Hershenson have admirers at much bigger institutions, too. In fact, today — almost exactly three years after the two launched a $50 million seed-stage fund under the eponymous moniker Pejman Mar Ventures —  they’re taking the wraps off a second, $75 million fund. They’re also scrapping their name and rebranding the firm as Pear.

Among Pear’s investors is New York Life Insurance, True Bridge Capital, and the University of Chicago, which also contributed capital to the firm’s debut fund. The school is back a second time because Hershenson and Nozad have “one of the most partnership-focused mindsets I’ve seen,” says Joanna Rupp, managing director of the University’s $1.1 billion private equity portfolio. “That extends to their limited partners [like us], general partners at other venture firms, and entrepreneurs.”

Certainly, Pear appears to think differently, which can perhaps be traced to its unusual roots. Nozad famously sold rugs to tech millionaires before becoming a full-time investor; one early bet was on the early smartphone company Danger, which sold to Microsoft in 2008 for $500 million. As it happens, it was through Danger that Nozad met Hershenson, a three-time entrepreneur whose husband cofounded the company.

Unlike other venture outfits that orchestrate expensive dinners with journalists, Pear organizes events at its offices for cash-strapped founders and students that feature VCs and renowned CEOs as speakers. Past guests include John Doerr of Kleiner Perkins, Yahoo cofounder Jerry Yang, investor Chamath Palihapitiya of Social Capital, and Zynga founder Mark Pincus — though Nozad says a more popular attraction is a life coach who comes regularly to help founders with their personal problems.