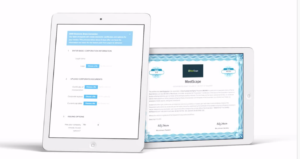 Every startup that gives employees option grants has to comply with 409A, a section of the U.S. tax code that was established in late 2004 and basically states that a company has to pay tax on some of the compensation it defers, including those options. The 409A valuations are a way to get to their value.

Unfortunately, for much of the last 12 years, such 409A audits have proved expensive, not to mention incredibly confusing. Accounting specialists initially charged startups north of $10,000 per audit, until a a sudden glut of specialists drove prices down fivefold. Meanwhile, many founders still don’t know precisely how valuation firms arrive at a particular number. Appraisers typically look at a company’s costs (meaning its assets and liabilities), its income, and/or the valuations of companies with similar financial and operating characteristics. But there’s little transparency into the whole process.

That’s not accidental or necessary, says Henry Ward, the cofounder and CEO of eShares, an 80-person Mountain View, Ca., startup that now works with more than 4,000 companies, digitizing their paper stock certificates along with stock options, warrants, and derivatives to create a real-time picture of who owns what. In fact, starting today, eShares is charging just $25 a month for its own wholly transparent 409A service. It’s also open sourcing its valuation models for startups that might like to manage the process themselves.

We talked with Ward yesterday about the new service and what it may presage.

There’s so much confusion about 409A valuations, including how they compare with a company’s fair market value. Is there an easy way to understand how the two work together?

In theory, and arguably in practice, a 409A valuation tends to run at a discount of 25 percent to the [value of a company’s] preferred shares. But as a company matures and heads towards an IPO, the 409A starts to converge toward the price that [investors have assigned it in its most recent funding round].

Why do you think confusion around 409A valuations has persisted for so long?

It’s consulting. When the IRS created this standard in the mid 2000s, they documented a set of models that you could use that would pass its requirements. Financial analysts got a hold of these models and they basically turned them into a trade secret. As more people ran into the business [to service startups], prices fell, but nobody solved the tech piece of it. Everyone was just hiring people to do cheaper and cheaper work.

Does that include you? You started offering 409A valuations as part of a bundled service a couple of years ago.