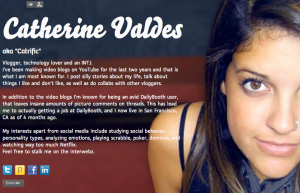 About.me thinks you want more control over how you’re perceived online, and a growing number of investors is betting it’s right. Indeed, the company — which invites users to create a digital landing page that can link to their Twitter, Facebook, Linkedin and Instagram accounts — has just landed a fresh $11 million in funding led by Foundry Group, along with True Ventures, SoftTech VC, CrunchFund and Bullpen Capital.

It’s a strong vote of a confidence in a company that sold to AOL in late 2010 and whose cofounders, Tony Conrad and Ryan Freitas, helped buy it back last February for a fraction of what AOL paid. At the time, they said they believed About.me could scale more quickly as an independent operation, and they made transforming the platform into something sticky — versus a place for users to “set it and forget it” — their top priority.

Today, numerous new features that allow users to see who has viewed their profile, compliment other users’ pages, and discover other people on the platform with similar interests, are gaining traction with the company’s registered user base of 4.5 million users. (The company doesn’t break out monthly active users but Conrad calls them “incredibly healthy and growing.”)

Going forward, says Conrad, the company plans to do even more for some of its fastest-growing demographic groups, including college students.

“Kids don’t have that much experience, and a lot of them don’t look that great in a traditional CV or resume product,” says Conrad. “About.me ends up replicating what happens in the real world and helps them leverage their personality and their strengths, so that’s one group where we want to create some additional functionality.” Think of the ability to include a resume below the fold as you scroll down, “or a list of ‘here are six things I’ve done,’ ‘here’s my superpower,’ and ‘here’s who inspires me,'” he says.

As for revenue, that can wait, evidently. “Some of [the company’s new funding] will be used to test out different [paths] to revenue,” says Conrad. “Like Twitter tested out Promoted Tweets and Promoted Accounts, we’ll be busy putting stuff out there and testing it. But the focus of [the new round] isn’t on becoming cash flow positive,” he adds.