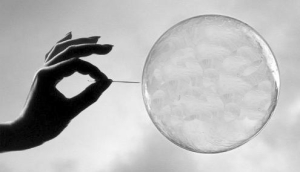 With so much talk lately of bubbles and burn rates, venture capitalists seem to be hoping for the best but planning for the worst. None will tell you with certainty that we’re at the top of the market, but they say they’re trying to be as prudent as ever — just in case.

Investor Stewart Alsop, for example, whose firm is in the process of raising a third, $100 million, fund, says the way his firm is planning for the end of today’s go-go cycle is by “not investing in momentum businesses right now.”

It’s not an entirely new trend for Alsop-Louie Partners, which has always stuck to atypical and very early-stage investments, and that’s largely because Alsop remembers the last bubble so well. “I was at [New Enterprise Associates] and we’d raised a new fund in 2000 and invested in telecom companies through that fall,” he recalls. “The idea was that these were real companies, buying real stuff.”

When it became apparent that the telecoms’ endless growth possibilities weren’t so endless (they eventually built up an oversupply of capacity), they tanked, and NEA — along with many other firms — had to write off almost all of their investments. The lesson for Alsop: “That venture capital isn’t based on what happens in the next 12 months.”

Venky Ganesan of Menlo Ventures says his firm is also being cautious. For one thing, Menlo is taking a good long look these days at whether the unit economics of the startups it meets with make sense. The firm is also focused on business models that aren’t dependent on the availability of cheap capital, and it’s “orienting toward more seed and Series A rounds so we don’t have a timing issue,” says Ganesan.

Ganesan says he doesn’t believe we’re in a bubble, citing some of Menlo’s portfolio companies like Uber, which are “growing revenue at a pace we haven’t seen in our history.” Even still, he says, by funding companies that will “go to market in 18 to 24 months,” Menlo is essentially buying itself time to better understand “whether this is a bubble or a long-term secular trend,” he says.

It’s an approach to which Greg Gretsch of Sigma West can relate. Gretsch says he doesn’t know whether or not we’re “in a bubble and headed for a crash” and that “anyone who says they know is a fool.” But he sees plenty of companies whose “business model is the ever-decreasing cost of capital that’s freely available” and says Sigma has been steering far clear of them.

Like Alsop, Gretsch suggests that his firm is mostly sticking to its knitting, meaning “focusing on companies that have a fundamental business with real customers who are buying.” He adds that while most of Sigma’s portfolio companies are spending their revenue on growth at the moment, “a large percentage [of them] could cut back to profitability if they had to. We don’t have any [portfolio companies] that will hit the wall hard” if the winds change.

That’s not to say that Sigma West is insulated from what’s happening around it. Says Gretsch: “The challenge in this market is that everything is expensive and you have to make sure you’re not making investments to keep up with the Joneses. We hear a lot of, ‘Our competitor has this great space and employee perks and they look better to [outsiders].’ And it’s like, yeah, those things would be optimal from a cultural standpoint, but those competitors are spending a ton.”

Gretsch says he tries to be sympathetic to his startups, but he’s not taking anything for granted right now. He points to a Chicago-based portfolio company that’s doubling its workforce every year and recently asked his opinion about whether it should move into a big new building whose landlord wanted a 10-year-lease, or into several smaller satellite offices that required shorter commitments but could come at a cultural cost.

He nudged the company toward the satellite offices.