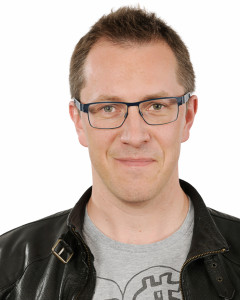 Almost exactly a year ago, Belgian-born venture capitalist Fred Destin left his longtime post with Atlas Venture in Boston and joined Accel Partners in London. Last week, over a charcuterie board at a French cafe in San Francisco, Destin talked with StrictlyVC about the move, what the Accel team in London shares in common with their U.S. peers (and what they don’t), and the newest trend in European startup funding. Some of that chat, edited for length, follows.

Yes, and started investing it in April of last year. The fund was raised with maybe a little bit of anticipation. Also, sometimes you meet no entrepreneurs you want to back, then you meet five at the same time, so our pace is always a little inconsistent.

How big is the team?

We have seven partners, one VP, one principal, three associates. We have a habit of promoting from within. I’m a rare external hire.

How closely tied are you to the team here in the U.S.?

We run separate funds, but it’s the same brand and we have a fair amount of overlap [in terms of LPs], and I believe we have 18 coinvestments that come in a variety of flavors. Both funds had been looking at SaaS accounting for small businesses, and in the end, [New Zealand-based] Xero is the only company you want to back in this field – we think it can kill Intuit – so we [collectively] made a $100 million investment in the company. We’ve also co-invested in [the newly public online marketplace] Etsy and [the Australia-based collaboration software company] Atlassian. Sometimes, it’s European-born companies, too. When we backed World Remit, a remittance business, half of its $40 million Series A came from the U.S. and the other half came from London.

What if you wanted more than 50 percent? Do you ever compete with the U.S. team?

I can’t really think of a case where we’ve  been competitive. They’re a really disciplined team on investments, and so are we. If we find something that we think is really great, we’ll say, hey, we can syndicate with Index [Ventures] or we can try to move all the money through the Accel partnership. [The U.S. firm] looks at [the deals] independently. But there are definite benefits [to partnering], as when we find a little gem like Showroomprive [a Paris-based online shopping giant that sells discounted clothes, cosmetics and household items]. It was bootstrapped and had got to quite a large size, and [my London colleague] Harry [Nelis] went to meet them and said, “We can write a single check. I’ll bring Palo Alto into it so you have one investor and one board member.” So we put in [roughly $47 million] in a single shot, with both funds contributing.

Can you see a future where you won’t be Accel London but something else? DFJ and Benchmark obviously decided to reign in their brands at different points.

You learn from what happens in the past. I’m not sure you can scale venture very well. Having general partners in London who effectively decide on what happens to the firm makes decision-making really simple.

We’re also in close cooperation with Palo Alto to make sure we represent the brand in the same way.

How institutionalized are your communications?

The important decisions, like when to hold an annual LP meeting or when to fundraise, are discussed extensively between the groups, but the rest of our discussions are very organic and multithreaded. You don’t want to fight the natural order of things. We’re very careful about not sharing too much information about the companies we look at, but we definitely share expertise and views and kind of help each other be better.

It helps when you have funds that are performing well and teams that are high quality. If one part of the organization was doing well and the other wasn’t, it might become more tense, but that’s not the case.

There’ve been lots of reports out this year about Europe falling behind.

I’m just back in Europe, and I’m amazed by the number of large successes being built. There were seven or eight billion-dollar-plus exits last year, including [the British property site] Zoopla [which went public last June] and [the online restaurant delivery company] JustEat [which went public in April 2014]. Our third fund has three [billion-dollar-plus] companies, including [streaming music service] Spotify, and guys like [ridesharing company] BlaBlaCar, World Remit, and [the online lending marketplace] Funding Circle are growing super fast.

I used to be quite negative about the market,  but now we’re seeing companies achieving hyperscale and building value really quickly, and in the case of [our portfolio company, the online marketplace and Craigslist competitor] Wallapop, it’s even bringing the fight to the local guys [in the U.S.].

But European entrepreneurs are often quick to note that their funding options remains fairly limited.

The VC landscape remains quite weak. You have Index and Accel as the sort of leaders. You have Balderton [Capital], which has enjoyed a great reinvention-slash-turnaround [since parting ways with Benchmark]. Then you have some new managers, including Mosaic [Ventures] and Frederic Court [a longtime investor at Advent Venture Partners who is raising a new fund under the brand Felix Capital], and a bunch of micros VCs like Hoxton [Ventures]. But there are a bunch of funds that have exited or stopped fundraising — names that everybody knows aren’t going to make it.

What’s happening, though, is that U.S firms and the “Tiger Cubs” are smelling blood, so we’re seeing Insight [Venture Partners], DST [Global], TCV, and some of these tech hedge funds all suddenly coming into Europe on a regular basis, and anything that scales they want to fund. It’s a huge factor right now. They’re hunting aggressively, writing big checks, and moving fast.

And that’s purely good news? As you know, there’s a little angst here about the impact all their money is having on companies and their burn rates.

In general, we love it because we finally have scaling capital. We just invested in Deliveroo, which is the European version of DoorDash. It’s growing like a weed, but a few years ago, we’d have had to scale organically or raise a small Series B. Now people are knocking at the door of companies that are scaling and saying: “Can we write a big check?” We’re like, finally, we’ll be able to build billion-dollar companies in less than 10 years – maybe in three to five years.

The other big factor in Europe is Rocket Internet, which used to clone companies but they had no balance sheet. Since its IPO [last October], they have a balance sheet. And while I don’t know exactly how much cash they have, it’s probably a billion-plus [dollars] that they can use to invest, replicate and whatever else they do, and they’re the biggest VC in Europe. They force people to raise their game, because if you want to compete against Rocket, you have to know what they’re doing.