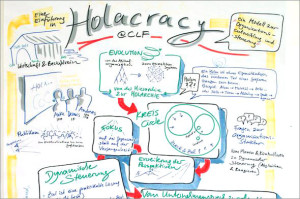 Last week, we learned that Zappos’ management structure is being replaced with a “self-governing” management system called Holacracy that dispenses with job titles and throws an elbow at traditional hierarchies, replacing them with a flatter structure that distributes power more evenly.

At first blush, the news could be interpreted as a predictably quirky Zappos maneuver by its employee-friendly CEO, Tony Hsieh. But Holacracy isn’t as zany as it sounds. In fact, rather than throw out much of a company’s structure, Holacracy actually applies far more structure to every decision to make it easier and faster to get things done. For example, a traditional management structure where only a few people are authorized to make decisions can lead to delays and missed opportunities. By contrast, Holacracy assigns different aspects of the decision-making process to a wider range of people, theoretically yielding a shorter turnaround on new proposals.

Brian Robertson — a Philadelphia-based management consultant who dreamed up Holacracy in 2007 after struggling to manage his first company — shared a bit more about how it works last week.

Holacracy involves different “circles” and uses “tensions” to steer an organization. Is there another way to describe Holacracy to those who might be confused by that kind of language?

At its core, Holacracy is a power structure for how to run an organization. Alignment, accountability – those are usually done through a management hierarchy. Holacracy doesn’t throw out those things but uses a different structure to get there, so instead of a single CEO, power formally rests in a constitutional process, and everyone is kind of on a level playing field because they know how to influence the organization through those rules.

So Holacracy is less about democracy and more about transparency.

It’s not democratic; decisions are autocratic, with every employee holding a different authority to make certain decisions. So it’s not a big consensus system; it’s just more distributed.

How would a CEO go about learning more? Should they start by scanning the constitution you’ve created? Do they need to hire you?

Any company is free to do what they want with the constitution itself, though we don’t recommend it. It’s a complex game; it’s hard to learn by reading a rulebook.

We find people who are already looking for alternative approaches – CEOs who are aware of the limits of the conventional ways of managing but who don’t know there’s an alternative. Then we offer to come out for a day, and we put them through the Holacracy system and the meeting processes that we use. We also try it with some of the company’s real, live stuff. There’s a big learning curve, but it’s easy to see the potential of it straightaway. We often hear [at these trials] that a company just got 10 times more stuff done than it normally would.

Along with Zappos, the publishing platform Medium is probably the highest-profile company using Holacracy. How did Medium cofounder Ev Williams discover it?

David Allen, the author of Getting Things Done, is highly respected by a lot of interesting people, and when he started talking about us [publicly], Ev noticed.

We wound up having a great breakfast. Ev said when he left Twitter [to start Medium], he was feeling this sense of dread, because he loved creative work, but he hated being a bottleneck manager. He was getting further and further from the work he loved. In fact, most of our clients aren’t people who are excited to have the [CEO] title for the first time; they’re pretty seasoned leaders who experience the same problems [as Williams].

Do you have any proof that Holacracy works?

We definitely lack hard data, but we do have a lot of stories from our clients, including David Allen Company and Precision Nutrition, in Canada. What we hear again and again is that it’s pretty transformative, and it’s usually the CEOs who are our biggest advocates.