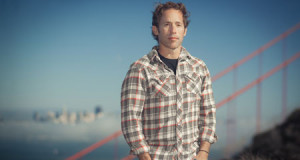 This week, a new study found that tropical cyclones worldwide are moving out of the tropics and more toward populations of people, especially in the Northern Hemisphere. It’s the kind of news about which we should be more aware, and concerned. But in the land of social media, it commanded about as much attention as a new software update from Blackberry — which is to say it went largely unnoticed.

Josh Felser isn’t okay with that. Which explains why the successful entrepreneur turned venture capitalist is trying to change the conversation through #climate, a new nonprofit that has enticed a small but growing number of people to download its app.

Here’s how the process works, loosely: The months-old organization researches and produces information on hundreds of climate-oriented nonprofits. It then produces shareable “actions” based on users’ interests. If I were predominately focused on the Amazon rainforest, for example, I might be pointed to the Rainforest Trust organization, along with a tweetable link about saving the cotton-top tamarin. My Facebook friends or Twitter followers could then click on that link to learn more about why these small primates are endangered and, hopefully, donate to Rainforest Trust.

It’s a tall order, of course — getting people to use the app, as well as ensuring the prompts are so compelling that social media users, despite their short attention spans, take the time to click on them.

Felser argues that he had to start somewhere. “You can’t look at this as a viral media app,” he told me during a chat last week. “Getting people to focus or take action on a negative [like global warming] is hard. But we know that in the last three weeks, we’ve driven 35,000 unique visitors to various nonprofits’ sites. That’s hard to do and I feel really good about it.” (Asked if his team can track how many donations have resulted from those visits, he says the technology exists, but that getting nonprofits to change their code is “a bit of a challenge.”)

So far, certain sports and entertainment figures have had the most impact on social media, including the band Guns N’ Roses, which has been asking fans to help save the Amazon, and the NBA, which has been promoting green initiatives and sustainability.

Felser would like to see many more of his colleagues in tech take an interest, though. Tweets of congratulation on his efforts have been nice, he suggests, but as far as he’s concerned, the Silicon Valley startup community needs to get more visibly involved in amplifying the work of climate organizations.

“We’ve created climate change and we have to fix it or it will destroy us,” says Felser, alluding to drought in the Middle East and Africa and rising sea levels that are putting people at risk in coastal regions like eastern India and and the Mekong Delta in Vietnam. “It makes poverty worse, it makes malaria worse, it makes everything worse.”

Felser says not everyone has to get behind climate change, though he thinks they should. Eventually, his organization will broaden its mandate to include many other causes.

Either way, he persuasively argues that the tech industry is missing an easy opportunity to be helpful. “I’m not sure that people in tech understand the impact they can have, with their knowledge, expertise, and reach. All are underutilized resources. They’re so passionate about entrepreneurship and tech that many forget the substantial impact they could have on the world if only they’d apply [themselves] to a cause.”