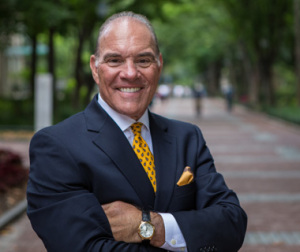 The first time I met David Pottruck, it was 1999 and he was co-CEO of the high-flying discount brokerage Charles Schwab, a title he’d share for five years with founder Charles Schwab before becoming the sole CEO of the company in January 2003.

Eighteen months later, the company — which Pottruck had pushed into the Internet age and that struggled after the dot com crash — ousted him in a decision that still stings, though Pottruck will tell you the company made the right decision.

A new book by Pottruck captures the experience. It also features interviews with a dozen others who’ve led organizations through periods of dramatic change, including Intel’s president Renée James; eBay CEO John Donahoe; JetBlue CEO David Barger; and San Francisco Giants CEO Larry Baer. I caught up with Pottruck last week to learn more about the book (which hits bookstores today), and where he’s focusing his energy now.

You spend a lot of time in New York these days. Have you moved there?

I’m still in San Francisco, but I have an apartment in New York and I’ve been spending more and more time there for personal and business reasons.

Tell us about your business interests. After leaving Schwab, you formed an investment firm called Red Eagle Ventures. How would you describe its mission?

After I left Schwab, I decided the smartest thing to do was work for myself and invest in early-stage companies and see if I could add value as a mentor, as a coach to CEOs.

For a long time, I stayed away from financial services. I wanted to do other things, learn about new industries. So I spent a couple of years working on a startup airline called Eos Airlines that ultimately didn’t make it. The idea was to fly [a high-end service] from New York to London, but while people loved it, the economics were challenging and when oil spiked to $150 per barrel for a few months [it killed the business].

Are you still interested in disrupting the airline industry?

No, I’d never invest in another airline. It’s a terrible industry. It’s like Warren Buffett says, if you want a small fortune, start with a large fortune and invest in an airline.

Where are you investing then?

I realized I should look for something that I knew about and would enjoy, and I became a founding investor in and chairman of Hightower, a fast-growing, very profitable, seven-year-old wealth management firm. It now has 30 different locations around the U.S., around 300 employees, and almost $100 million in revenue. I’m also the chairman and a large investor in CorpU, a leadership development business that launched a few years ago and whose revenue is getting into double digit millions now.

So you like making concentrated bets. Are you ever tempted to pick up the pace of your investing?

No, negotiating term sheets, trying to dig into whether or not a business is something to get involved with or not – I hate every aspect of it. I’m an operator. Strategic, tactical, and leadership issues are what fascinate me. That’s what I like to think and write about.

Your new book focuses on breakthrough change. How interested are you in the many changes happening in financial services? What do you make of bitcoin specifically?

If you look at it, it’s like gold, whose value is in the eye of the beholder. Gold has very little real tangible value. It’s a shiny metal. But it goes up and down because it’s considered a store of value. Bitcoins are like that that. They’re simply digits, and if the public believes them to be a store of value, then I think they are. But in my mind, it’s an extremely risky currency, if you even want to call it that.

People like the whole idea of a currency that’s not backed by a government, but governments play a key role in stabilizing currencies and ensuring they have a stable value. It doesn’t always work out that way, but bitcoin doesn’t have anybody doing that. I mean, who is accountable? The answer is nobody. Nobody has raised their hand to say, I’m behind this. I think it’s nuts.

You spent 20 years at Schwab. Are you still in touch with Charles Schwab?

I had an amazing career because Charles Schwab the man gave me that opportunity. He supported me and promoted me and got behind me when I made idiotic, adolescent mistakes. I wish my last days had ended differently, but the company needed different leadership at the time, and Chuck and I continue to have a very nice relationship.