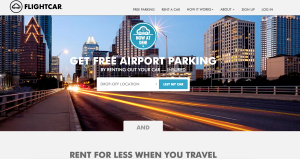 Imagine a young startup where two of three founders are pushed out the door. Imagine that this same startup parts ways with its COO, its SVP of Finance, its VP of Guest Experience, its VP of Engineering, its VP of Marketing and roughly half its other full-time employees, all within a period of months. Not last, imagine that the remaining cofounder, who is 20, has never before held a full-time job.

Sound like a great company into which to sink a small fortune? Investors in Flightcar, a 3.5-year-old, San Francisco-based startup, apparently think so. In fact, Priceline Group, Tencent Holdings, and earlier backers GGV Capital, General Catalyst Partners, Softbank Capital and First Round Capital came together last month to quietly provide the company with $20.7 million in Series B funding. It has now raised roughly $40 million to date.

Flightcar was formed to address a very real problem: the hassles involved in airport parking. The idea: while you’re away on a trip, someone else arriving into town can use your ride. You leave your car with a valet and skip the process of schlepping back and forth to a far-flung lot. You also avoid parking fees that can add up fast. Your car, meanwhile, gets insured against theft and damage, it’s thoroughly cleaned, and you’re given a little cash for every day your car was rented.

The idea isn’t foolproof for many reasons, including growing competition from Uber. But Flightcar had been ticking along just the same, striking deals with three airports – San Francisco, Boston, and L.A. — by September of last year and raising $13.5 million in the process.

Then, encouraged by investors to start scaling as rapidly as possible, the figurative wheels began to come off.