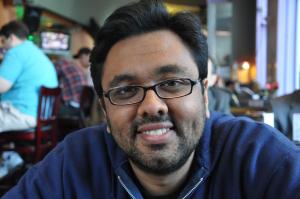 I’m sitting at a cafe in San Francisco’s North Beach neighborhood with Hiten Shah, and he’s telling me what’s right and wrong with StrictlyVC. The good news: it appears to have so-called product-market fit. The bad: its site is too basic, though Shah puts it much more charitably. “It’s not like a criticism, but let’s make the design better. We can fix it with just some little tweaks.”

In all likelihood, I’m one of at least five new people who will, over the course of the week, sit down with Shah, a three-time entrepreneur and occasional angel investor who has gained renowned in the Bay Area as an active startup advisor, and who is often sought out as a “growth hacker.” (Shah’s two most recent companies, bootstrapped Crazy Egg and venture-backed KISSmetrics, both help businesses measure and optimize their sites, their social and mobile applications, and their revenue.)

I’ve sought him out for a latte and some light conversation. Our conversation has been edited for length.

You spend a lot of time with entrepreneurs, many of whom are thinking about growth. When is it the right time to start obsessing over it?

Well, first, I think growth hacking and all these tactics that people are sharing are good, but there isn’t enough conversation around the work that you have to do first. People tend not to spend a lot of time on foundational stuff before they start trying all kinds of random things. As for when to start thinking about growth, the common adage around here is that you want to think about it after you’ve hit product-market fit, meaning that enough of your customers already love what you’re doing that lots of other people in the world would probably benefit from your product.

Is there a percentage of customers who have to really love a product? What’s the tipping point?

There’s all kinds of market research around this. One stat suggests that if 12 out of 30 people really love your product – meaning they’d be very disappointed if it disappeared – you have what resembles product market fit. A small group can be very impactful in helping you understand [your product].

You make occasional angel investments, including in the shared inbox app Front, which just raised $3.1 million in seed funding. Are bigger seed rounds the way to go? Any thoughts on this newish trend of serial seed rounds?

The advice I always give people is to hold off on trying to raise money until they’ve removed as much risk as possible from their product. The startups they’re competing with today are much farther along than they were seven to 10 years ago.

On the debate over whether companies should do seed rounds and [whether two rounds dilutes founders too much], it’s entrepreneurs’ fault. Maybe they received bad advice, but it’s more likely that they’ve overspent.

Sometimes they spend money on marketing before they have product-market fit, or they hire too many people too fast, or they pay too much in rent.

I’d think the latter would be particularly tricky, given the steep price of office space in San Francisco specifically, where so many startups want to be.

I do think rent is an issue, but the talent pool here – from executives to [lower level staffers] — is higher than anywhere else right now, so if you’re not here, you have to offer all kinds of crazy things or else be the number one company in your area, which is hard. In San Francisco, you can be a [mid-tier] company and still hire a lot of great people. Luckily, there are lots of shared workspace options for startups, like Heavybit Industries.

I think a bigger issue is a lack of education around operating an early-stage business.

Why don’t you write a handbook?

I don’t like writing. I’m doing a 30-day blogging challenge. I’m on day four and I’m still dreading what I’m going to write about.