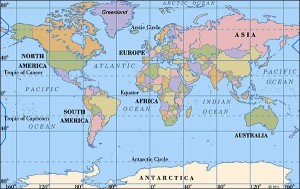 When Manhattan Venture Partners publicly launched last month, the merchant bank joined a growing number of players who are matching investors with startups that are in no apparent rush to go public.

Talking recently with StrictlyVC, plugged-in investor and AngelList cofounder Naval Ravikant opined that it’s “possible that the amount of secondary trading going on in Silicon Valley under the covers is going to match the amount of primary financing soon” as household names like Uber and Airbnb and Dropbox move more slowly than expected toward IPOs.

Perhaps it’s no wonder then that Manhattan Venture Partners is casting its net far beyond the Bay Area. Last week, we talked with the firm’s cofounder, Jared Carmel, and its chief economist, Max Wolff, about which markets, exactly, the new outfit is chasing.

Most of the so-called unicorns are headquartered — broadly speaking – in Silicon Valley. But you’re also looking elsewhere. Why?

JC: We’ve expanded overseas because we’re starting to see demand for what we do from [India-based] Flipkart and [China-based] Xiaomi and the like. Those companies aren’t current customers, but [the China-based e-commerce giant] Alibaba was one of the big positions we took last year. We had a significant amount of shares that came from an executive last April, prior to its [September] IPO.

MW: We see the center of gravity in pre-IPO tech companies beginning to drift both south and east from the U.S., which is pretty consistent in terms of the global economy as it drifts more toward the global south away from the U.S. and Europe. It’s much more advanced in the global macro sense than in the private company sense. Today and in the foreseeable future, Northern California will remain at the center of a lot of this activity. But right now, as large and aggressive as Uber’s [$40 billion] valuation is, it’s still $5 billion less than the valuation of Xiaomi, a handset maker that no one in the U.S. has really heard of outside of the business press. We’re at a moment historically where we’re living in the long shadow of the largest tech IPO ever – Alibaba, which, by the way, when we first began talking with people about it long ago, they thought was a [brand of] hummus.

Culturally, are secondaries seen as an acceptable practice in China and elsewhere? Obviously, in the U.S., they were long stigmatized as a last resort for troubled companies.

MW: There’s more acceptance of secondaries and more acceptance of high, late-stage valuations than at any time in the recent past. We’ve seen large [foreign] institutional investments into secondary shares really since Facebook, and given that many of those investors – who’ve also backed LinkedIn and Tesla and Twitter – made money, we’re seeing them come home and really start to introduce [secondary investments] to the whole market.

JC: It’s still pretty new in the U.S., so it’s even newer in many countries, and I don’t think it’s as well-understood or accepted as in the U.S. But as we’re starting to see companies get into seven-plus years in their lifespan, they’re seeing that their best employees are heading off to other projects and companies and they’re beginning to understand that a secondary or liquidity program can also act as a retention tool.

You’re also talking with U.S. companies. What are you seeing? What’s hot? What’s not in terms of institutional demand for secondary shares?

JC: Games [companies] have really been in the doldrums, owing to private and public investments that didn’t necessary end well in recent years. Social is definitely deeply out of favor. Another sector that people are much less excited about are flash deal sites. Red hot: privacy and private messaging and driver logistics companies.