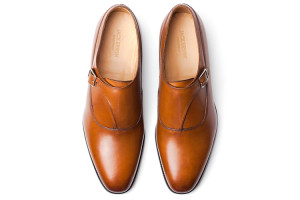 VCs must be hearing a lot of pitches from companies that want to be the next Warby Parker, the chic discount online eyeglass vendor, whether it be high-tech wine gadgets, fitted shirts, or dress shoes for men.

If the market is getting saturated with these new brands, you wouldn’t know it. In fact, this morning, another new shoe company called Jack Erwin is announcing that it has raised $2 million in Series A funding led by Crosslink Capital, with participation by Shasta Ventures and Menlo Ventures. Yesterday, to learn more, I reached Lane Gerson, one of the founders of the six-person company, at the startup’s Brooklyn-based offices. Our chat has been edited for length.

You’ve worked as a CFO and a controller. Did you know anything about retail? And why shoes?

My friend and cofounder [Ariel Nelson] was shopping for shoes for a wedding and just wanted dress shoes, and they were all either too [fussy] or too expensive. We wondered if we could find someone to help us make a pair of shoes for $100 that we could then sell for $200, and we spent three months talking with everyone we knew, and each was a dead end. As it happens, Ariel went to a two-seat barber and wound up sitting next to a [product manager of footwear] at Ralph Lauren, who was dealing with buyers and suppliers. We all went for drinks a few weeks later. That was August 2012; he just came on full-time in January.

You have five core shoes in a few different colors. Where are they being made?

In Portugal, at a third-generation factory. We’d talked with factories in Brazil and Portugal and received a bunch of samples and this one had the best quality leather shoes. So we worked with a designer, they sent us samples, we corrected them, and we placed our first [purchase order] in May 2013.

You make it sound so easy. Where are the shoes shipped?

They’re warehoused in a third-party logistics center in Brooklyn, less than three miles from our office.

Free shipping, free returns. We want people to try them on and then hopefully they’ll enjoy and keep them.

What percentage of your customers return the shoes?

About 25 percent, but the data is inconclusive right now. We launched the company publicly in October and we’ve had tremendous demand — so much so that we’ve sold through or initial order and are left with broken sizes. So people are buying sizes that aren’t the right size, and they want exchanges that we don’t have. We raised the [venture] money almost purely to buy inventory.

Is that supply-demand balance hard to manage? What’s been the biggest surprise so far?

It’s all been really positive actually. We’ve learned there’s an appetite for people to buy new product and I think people like a new story and are wiling to give us a try. And if you can give them a product that meets their expectations and you’re responsive to them, you meet great people. We’re discovering that just being nice goes a long way.