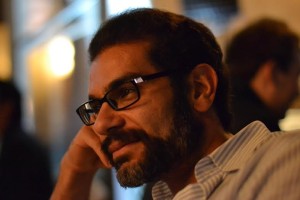 “I stay away from the rent-your couch or parking space [startups],” says Farshchi, who joined Lux Capital as a principal in 2006 and was made a partner last month. “I have a semiconductor background, so I spend time looking at technology in the hardware space, from materials that enable higher-performance electronics, to devices like transistors and memories, to systems and software to run on those systems.”

Given his education – including a PhD in electrical engineering from UCLA – it’s no wonder. I recently caught up with Farshchi over an egg-white brunch at the Creamery in Palo Alto, Ca. There, we talked about his new job and how he plans to put his stamp on the industry.

First, let’s get readers up to speed on Lux Capital. Give us the broad brushstrokes.

Sure, we’ve been around for 14 years, and we’ve invested in more than 35 companies over three funds, including a $250 million fund we closed last year. Until recently, we focused on cutting checks in the millions [of dollars] as the Series A or B lead; over the last 12 months, we’ve also been experimenting with a seed-stage strategy to monitor companies closely and bring value to them [as a front-seat passenger], with the goal of converting those seed positions into Series A positions.

Our biggest check would be in the higher single digits, but we set aside $10 million to $15 million per company; we want to maintain double digital ownership of [any] billion dollar outcome.

You focus largely on chips, which aren’t really being built in the U.S. anymore. So what’s happening here that’s interesting to you?

It’s true that a lot of core technology is moving to Asia. A lot of fabless semiconductor companies, Qualcomm, Broadcom – all their manufacturing is taking place in Asia, and a lot of bleeding edge technology companies in semiconductors are Asian companies.

But there’s still a lot of innovation that needs to be done, and you’d be surprised by how much is happening here. One of my companies, Molecular Imprints, [an Austin, Tx.-based company] which makes a next-generation semiconductor manufacturing technology [called nanoimprint lithography], sold to Canon earlier this year.

How do these next-generation technologies get around or reduce the considerable expense — which is something like $100 million, right? — involved in designing a new chip?

I just invested in a stealth company that’s playing into this challenge — the $100 million upfront cost associated with building a new chip. If you’re a semiconductor company making a chip, it has to go into every single one of these smartphones [that we all use]. Otherwise, you aren’t going to make money. But not all products have the same requirements, so you wind up making a chip that’s okay for most of the devices out there but not optimized for anything [specific].

This stealth company is introducing software programmable silicon, where you can configure that portion that you need, so the chips become far less like Sunday papers of yore, where you threw out a lot of sections, and more like iPads, where you’re actually viewing and getting what you want.

It does, with field programmable data arrays. But they come at a huge expense in terms of area and power and make no sense unless you’re making a $10,000 chip that will go into a Cisco switch. But this [startup’s] technology is making it accessible for [a broader array of technologies].

Lux was founded in New York and only opened an office here a year or so ago, but it seems like the firm is succeeding in raising its profile on the West Coast. What’s that process been like?

For years, I was working out of my car and basically borrowing office space. We had a $100 million fund, so the economics didn’t support [a second office]. I basically spent all my time walking up and down the halls of Stanford, Caltech, UC Berkeley, UCLA. My first deals were all university spin-outs. Now, we have an office and we’ve become more broadly founder focused. That’s maybe why you’re hearing more about us.

Yesterday, the Federal Aviation Administration released its first “roadmap” for allowing unmanned aerial vehicles (UAVs) access to U.S. national airspace beginning in 2015. The idea is to permit some drone activity while preserving enough flexibility for the FAA to adjust its rules and regulations if it needs to.

The step was a welcome one for entrepreneurs who are working on flying robots for the military — whose airspace isn’t regulated by the FAA — but who will soon be able to sell to a variety of commercial industries, including agriculture, construction, oil, gas, and mining.

“There’s a light at the end of the tunnel now,” says Bilal Zuberi, a Palo Alto-based partner at Lux Capital, who sees a whole new industry about to emerge — with droids as just the starting point. He likens the moment to “when the satellites first went into space and data became available. You could do so much more with it than people imagined.”

Think maps that update in real-time or sophisticated applications that notify farmers when crops have been afflicted with specific diseases.

“Right now, people are thinking about just the hardware,” notes Zuberi, “but the hardware will lead to huge software opportunities downstream.”

CyPhy Works is one example of a startup that is building UAV hardware but betting on a future in software. The Boston-based company —  which announced $7 million in fresh funding this week led by Lux Capital — makes a 3-pound flying robot and a larger, 12-pound model that are both tethered to portable command stations but can float up to 500 feet off the ground and hang there for hours while beaming down high-definition video.

The company’s primary customer right now is the U.S. military, which is using the drones at combat outposts to monitor compounds and facilities, among other things. (The drones can accept a variety of payloads, from three-dimensional scanners to sensors for chemical detection.)

“It’s a good time to be developing commercial applications, which we view as any opportunity to help manage a project using a bird’s eye view, whether it’s monitoring a bridge being built, a pit being dug, or a facility to see what people are doing,” she says.

Part of that process will involve convincing customers that they need satellites of flying cameras to replace their stationary cameras. But Greiner wants to be able to provide them with automatic detection and imagery analysis, too.

I ask Greiner about the privacy concerns that have been holding up the FAA. What about people buying UAVs to spy on their neighbors? “I share that [privacy] concern,” she says. “I don’t want one outside my house. But that’s not what we’re building here.”

What of the competition? After all, according to the FAA, there could be at least 7,500 commercial drones in use within five years.

Greiner suggests she isn’t concerned with what others are doing. She tells me about the top engineers she has hired from iRobot and other UAV companies. Grenier also talks about her passion for her work. “I’ve wanted to build robots since I was 11…it’s exciting stuff to be doing.”

Most crucially, she notes, no one is leading the pack at this early date. “It’s still very early in the game.”