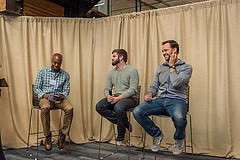 At a StrictlyVC event in San Francisco last week, Charles Hudson of SoftTech VC sat down with Sequoia Capital partner Bryan Schreier and Marco Zappacosta to discuss Thumbtack, an online marketplace for hiring workers that Zappacosta co-founded soon after graduating from Columbia University in 2007.

Thumbtack is interesting for numerous reasons, including the amount of funding it has raised — $148 million over three rounds, all within a 14-month period – and who its investors are. Sequoia is among them (Schreier sits on Thumbtack’s board). So is Google, which provided Thumbtack with $100 million last summer – and, the business world recently learned, is now entering into direct competition with Thumbtack.

Hudson, who spends much of his time studying marketplaces, asked Zappacosta and Schreier – a former Googler – about their “multifaceted” relationship with Google, among other things. That conversation, edited for length, follows:

CH: How did Sequoia and Thumbtack come together?

MZ: Jason Calacanis introduced us to [Sequoia partner] Roelof Botha and another angel investor introduced us to Bryan. It was the fall of 2010. Unlike a lot of VCs, they were very explicit about what they thought was good and wasn’t yet good. When we [later] went back with numbers to show them [how we were growing], they did [write a check].

CH: Many marketplaces sit in between the buyer and seller, but Marco, you’ve taken the opposite stance. Why?

MZ: A lot of entrepreneurs and investors view the transactional model as a way to get a higher take rate. The problem in doing that is you’re solving your own problem; you’re not actually solving the customers’ problem at that point. There are times when you fundamentally [need to act as the facilitator]. Taking payment is key to making eBay work. It’s key to Uber, where speed is fundamental. But with Thumbtack, when a customer is spending $3,000 to repaint their house and you ask them what the hard part is, no one ever tells you it’s about paying the painter. It’s about finding the painter, and that’s the focus at Thumbtack. [Editor’s note: Thumbtack sends customer requests to service providers like plumbers, caterers, and painters. If the service provider thinks it’s a fit, they pay Thumbtack a fee to shoot a quote to the customer, who then chooses whether or not to work with that service provider.]

CH: Is leakage –people going off platform to have a direct relationship – something you’ve ever worried about?

MZ: If you haven’t created enough value for both sides to keep using your platform, that’s your problem.

CH: [Tell us about your fees.]

MZ: We’ve explicitly kept [them] very low — much lower than we think it could be. If you look at other marketplaces like Airbnb, it’s 10 to 12 percent. Uber is now 18 to 20 percent. eBay is like 13 percent. We’re below that and happily because our goal is to get market share. Today we move a billion dollars worth of commerce on the platform, which we feel good about, but that’s still nothing relative to the almost trillion dollars worth of commerce happening in the US. That’s the thousand x [opportunity] in front of us.

CH: You recently raised $100 million from Google Capital. Google has also made some reference that they have designs on the home services market.

MZ: I have to give Bryan credit for board member words of encouragement when this happened, which is that if Google or Facebook or Amazon aren’t competing in your market, then you’re probably in a shitty market. And I think he’s exactly right.

BS: You felt better for like three seconds, right?

MZ: [Laughs.] It’s indicative of the opportunity being enormous. I don’t perceive any sort of nefarious action on the part of Google Capital. I think it’s unfortunate. It’s a 50,000 to 60,000 person organization, but it’s why we’ve kept them at arm’s length. We’re excited to have them as investors, but we’ve been careful of that relationship accordingly.

BS: Thumbtack connects people to people; they don’t connect companies. They don’t connect ads to people. It’s a very different business, with people on both sides who have an intimate relationship. This is something that Google has never been very good at. [It isn’t] intrinsic to their DNA.

MZ: The opportunity and the challenge in this space is just how fragmented it is. There’s no natural point of aggregation as there is in retailing, where you can go to a distributor and instantly get access to 30 or 40 percent of the inventory in that category. So Google and Amazon — despite their money and brands and hard working employees — have to go out and recruit these plumbers and caterers one by one, and that’s a fucking grind, one that we’re real good at, and one we’ve done without any salespeople and with a lot of technology and innovation.

CH: How do you think about Amazon given its reach and scale and financial resources?

BS: They still suffer from that corporate DNA issue, which is that they send packages to people, not people to people. And it’s very different. You have to get people on the phone when they’re fixing a toilet and really don’t want to be bothered.

CH: You raised two fairly large rounds back to back. Why?

MZ: The truth, at the end of the day: it’s because you can. We didn’t need the money. The business is growing great and generating very real revenue. These rounds in happen in quick succession and in ever-growing numbers because companies . . . [in a big space and with a big vision] . . . can.