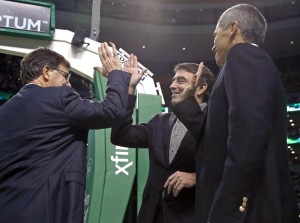 Causeway Media Partners, a Boston-based growth equity firm, has been flying under the radar since its inception in the spring of last year. That’s partly because its founders don’t need to draw attention to themselves. Wyc Grousbeck, a former general partner at Highland Capital Partners, is now an owner and the CEO of the Boston Celtics. Mark Wan, who cofounded the healthcare-focused firm Three Arch Partners, is an owner in the Celtics and the NFL’s San Francisco 49ers. Meanwhile, Bob Higgins cofounded Highland Capital Partners, where he worked with Grousbeck and invested alongside Wan.

Higgins, who still sits on the boards of four Highland portfolio companies, says there is also an experimental element to the whole endeavor. In fact, Causeway was never something he expected to jump into when he began transitioning out of Highland in 2012. As he tells it, he, Wan, and Grousbeck sat down last year for a friendly chat, and wound up in business together.

“We starting talking about what’s going on in sports media, and the more we talked, including with [sports team owners], the more [interest it generated]. And before we knew it, we’d raised a fund without even really trying,” he says, laughing.

Today, Causeway has a clear mission, to find media- and tech-related investment opportunities that can benefit from the friends’ network of NBA and NFL team owners, media executives and professional investors. And it’s investing $125 million — including a “good chunk of our own money,” says Higgins — to “see if the space is as attractive as we thought.”

Higgins says Causeway’s ability to make warm introductions is among the biggest benefits to its portfolio companies. “If you’re a biotech investor, you need to know all the pharmaceutical people, because they’re your potential partners and acquirers. Similarly, we’re spending a lot of time with media companies, team owners, and people with sponsorship dollars so we can make connections that are critical to our companies.”

Going forward, the idea is plug between $5 million and $25 million into a handful of other portfolio companies – deals that will likely find their way to Causeway through a variety of sources, including some of Causeway’s LPs, which include the general partners of 11 other investment firms, along with sports owners. Higgins say the firm is also receiving calls from “people in the entertainment industry that know of things that are potentially interesting as acquisitions for them, but aren’t quite at that stage yet,” says Higgins.

There’s certainly no shortage of potential opportunities, says Higgins, who sounds a bit taken aback by the amount of deal flow the partners are now seeing.

“We’re looking at 100 things for every one [investment] we make. And inquiries are in the thousands.”

Photo of Grousbeck, Wan, and Higgins high-fiving by Elise Mendola for Associated Press.