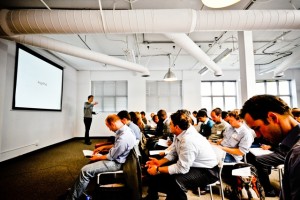 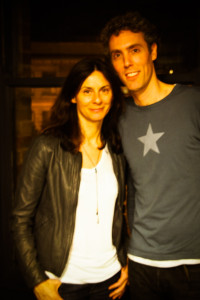 Today, AngelPad, the San Francisco-based incubator, is hosting an invitation-only “demo day” for 150 to 200 angels and VCs, and you can bet these investors are going to bring their checkbooks.

In four years’ time, AngelPad has become one of the most reliable hit machines in Silicon Valley. And it’s done it largely by operating as a kind of anti-Y Combinator, even while the famed incubator was its inspiration.

There’s the cosmetic difference, for starters. While Y Combinator is located in sunny Mountain View, Ca., AngelPad, which also has offices in New York, rents out space on a gritty block of San Francisco’s Tenderloin neighborhood. (It’s a little too gritty for its demo day; AngelPad is hosting its event today at an upscale restaurant roughly a mile away.)

AngelPad isn’t as widely known as Y Combinator, and intentionally so. Founder Thomas Korte, who spent seven years as an international product manager at Google, likes to keep things intimate, stressing the importance of community to the startups that pass through AngelPad as well as the network of investors with which he works. (Even the press who can attend its demo day is tightly restricted.)

In another departure from Y Combinator’s mode, AngelPad tends to focus on enterprise companies, typically admitting just one or two consumer-facing startups into each of its “cohorts.” For Y Combinator, working with startups that cater to businesses is a much newer development.

Perhaps the biggest difference, though, is that while Y Combinator looks to grow even bigger, adding ever more partners to work with its startups, AngelPad is, in a sense, shrinking. Korte once relied heavily on former Google colleagues to help mentor startups at AngelPad. Today, he and his wife and AngelPad partner, Carine Magescas, coach all of the startups themselves.

(Korte does make one notable exception. He still arranges for each startup passing through the program to meet once with one of his trusted advisors — friends like Wesley Chan, currently an entrepreneur-in-residence at Google Ventures. It’s a kind of “reality check. You need outside input once in a while,” says Korte.)

Clearly, AngelPad’s approach is working. AngelPad startups in the news include Storefront ($7.3 million Series A led by Spark Capital), Crittercism ($30 million Series C), and Boxbee ($2.3 million seed round), and Korte tells me that another AngelPad company, the mobile advertising startup MoPub — acquired by Twitter for $350 million in stock last fall — will be worth roughly one billion dollars when Twitter’s lock-up expires in the next couple of weeks.

So how does the AngelPad process work? Twice a year, Korte and Magescas stage an open application process that usually attracts about 2,000 applicants who are asked to submit a two-minute video, along with an essay, about their company. The couple then whittles the list down to between 100 and 200 of the most promising teams, interviews each for 25 minutes over a two- to three-month period, then chooses a dozen of them to coach over the following 10 to 12 weeks.

Each team receives $60,000 in exchange for 6 to 7 percent of their company. (AngelPad uses capped convertible notes.) At the end of the program, a demo day is staged, and Korte and Magescas then spend the next six weeks or so working with the startups to secure seed funding.

Most of the money is coming from the couple’s bank account. (Korte was among the first couple of hundred of Google employees.) Korte says “several individuals also participate in each cohort,” and that AngelPad also raised a $7 million fund last year to help fund its startups.

As for what he’s looking for, he mentions numerous things, including “mobile-enhanced” businesses that do things in a way that we’ve always done them but in a more efficient way. (He points to the delivery service PostMates, another AngelPad startup that has gone on to raise significant funding.)

Korte says he doesn’t rule out applicants that are entering well-covered terrain, either, a lesson he learned at Google. “Apart from self-driving cars, Google has almost never been the first in anything, honestly,” he notes. “What they’ve done is be significantly better at every single one of those,” he adds.

Seemingly, the same could be said for AngelPad itself.