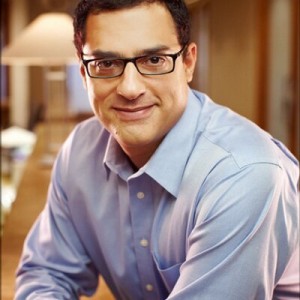 One of the biggest venture fundings ever was confirmed yesterday, a billion-dollar round for the India-based e-commerce company, Flipkart.

Vispi Daver and Murli Ravi hope it’s a good omen for their new venture capital firm, Unicorn Venture Capital — named not after a popular blog post, they say, but a mythological creature in East Asian culture associated with prosperity. Indeed, with a little luck, they’ll raise the $50 million they’re targeting for their debut fund, which they intend to invest in early-stage tech startups in India, Singapore and Southeast Asia.

Their backgrounds should help. Daver spent eight years at Sierra Venture Partners, where he led several deals in India-based companies, including Makemytrip, one of India’s largest online travel companies. (It went public on Nasdaq almost exactly four years ago.) Ravi, meanwhile, spent the last five years as the head of South Asia investments for JAFCO Asia in Singapore. I spoke with Daver earlier this week about the duo’s plans.

Murli is staying in Singapore while you move from the U.S. to India. What’s the competition like where you’re headed?

There are only about 40 people on the tech side of VC with early-stage investing experience in India and that’s probably across 10 groups, from indigenous funds to Sand Hill Road firms. It’s still very early there. MakeMyTrip is just one of three [India-based] venture-backed public tech companies, and the only one on Nasdaq.

Do LPs think it’s still too early? I’d read that $190 million was invested in early-stage tech firms in India last year, up 25 percent from 2012. But those are still small numbers.

No, the growth metrics are too exciting. Talk with any tech bellwether – Facebook, Google, Evernote, Dropbox, Salesforce – and they’ll tell you about downloads from India. Growth on the smart phone side has wowed everyone. Facebook already has 100 million users in India – the second biggest base of users after the U.S. If you take into consideration [other] app stats, the Philippines, Bangladesh, Vietnam – they’re all in the top 30 [in terms of users] and they’ll be in the top 10 soon, based on economic and population [trends].

How well do you and Murli know each other? Have you made investments together?

We’ve known each other for a year and looked at 75 companies together — two of which we’ve invested in and will grandfather into the new fund. We both grew up in Mumbai. He was one of those really smart kids who the Singaporean government sucks into the system, sending them to premier educational institutions and to a premier investment house after. [Before joining JAFCO, Ravi was a senior associate at Singapore’s sovereign wealth fund Temasek Holdings.]

Why does it make sense to operate from two different posts?

No tech company is focused on Singapore alone, where just five million people live, and similarly we think that Indian startups will be expanding into Southeast Asia and that having a presence there will be helpful. From a legal and regulatory perspective, it makes a lot of sense for India companies to [plant their] headquarters there. It’s very developed, with a government that works really well. There are also lots of positives in terms of easy living.

How do you feel personally about returning to India?

I’m excited. The environment in India is interesting. Entrepreneurship is generally in a lot of people’s blood. There weren’t as many professional jobs for the last generation, so a lot of people were entrepreneurs and it’s not a big convincing act to get people to [take the plunge]. It’s also the case the young developers are less and less different than their counterparts elsewhere. They’re using the same apps and learning the same ways to code. Big ideas can come out of India, too.

Murli Ravi is the head of South Asia investments for JAFCO Asia, and from his perch in Singapore, he’s never seen so much cross-border activity as in the last 12 months. Ravi joined JAFCO in 2008, after studying the regional venture community as a senior analyst with INSEAD. “Let’s just say I’ve made three trips the U.S. in 2013. I made zero trips to the U.S. in the four years prior,” he observes.

Late yesterday, we Skyped with Ravi to learn more.

Globalization is an ongoing trend. What are you seeing?

I cover a lot of territory – Southeast Asia, India, Australia – and I’m seeing a preponderance of people not just coming to Singapore and staying here, including U.S. companies, but I’m seeing startups in Singapore whose attitude is to quickly expand. I see many more of them looking to enter China and India, which are both about five hours away [from Singapore] by plane, and even sometimes Japan and Europe and the U.S.

What’s changed in the last 12 months?

I think Southeast Asia as a whole just has a much larger pool of talent coming online now for startups to harness. Also, historically, broadband penetration wasn’t high. Incomes were low. The smart guys would typically leave. All of those patterns are reversing.

What types of companies are coming to Singapore from the U.S.?

Broadly, you have a lot of small U.S companies and Australian companies and even Japanese companies that are realizing that Southeast Asia is an interesting market. If you just look at the English-speaking countries across the region – India, Australia, Singapore, Malaysia, the Philippines, and almost all the others have some English in a business context – that’s close to two billion people, or roughly 30 percent of humanity.

You also see companies move here because [their product is better suited to the market in Asia]. I sit on the board of a company called Bubbly , formerly Bubble Motion, that was founded in the Valley but moved to Singapore.

I remember reading about that move and thinking that it boiled down to lower costs for the company.

Well, Bubbly is a social messaging service like Twitter, except that instead of read and tweet, you speak and listen, which also appeals to the markets here. Unlike on Twitter, where you’re talking to the world and hoping someone will talk back, with Bubbly, it feels like someone is talking to you because you hear them in your ear, whether it’s a friend or a celebrity who has recorded a message about picking up her kids or an upcoming show. Unlike on Twitter, by the way, consumers here are also willing to pay to listen to celebrities. Right now, the biggest markets for Bubbly are India, Japan, Indonesia, Philippines – all of which have their own celebrities.

Do other recent transplants jump to mind?

A couple of other companies that have taken the same route are Vuclip — which hasn’t quite moved its headquarters to Asia, but does focus mostly on Asian and especially Indian audiences — and Mig33 — which did move and has seen success in Indonesia in particular.

You also have companies like Line and Kakaotalk that didn’t originate in Southeast Asia but now have a huge user base in this region. Coincidentally or otherwise, these messaging companies have a lot of similarities with Bubbly.

What about enterprise companies?

It’s so far been a little less common for enterprise companies to move here, and I see that as a major untapped opportunity. There are lots of inefficiencies in the way big business is done in some of the countries here, which gives more competitive firms from elsewhere a potential advantage if they choose to come here. Equally, some startups from this region who are able to thrive here have shown that they are quite capable of stepping onto the world stage, because the historical lack of resources available to small companies is a sort of trial by fire.

Corrections: The original version of this story featured news of a particular celebrity on Bubbly; while the celebrity is expected on the platform soon, he isn’t yet “live” on the network, we were told after this piece was published.