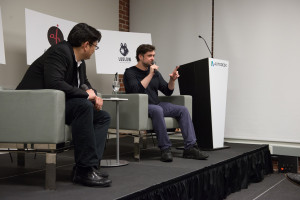 Last week, toward the end of a StrictlyVC event in San Francisco, GGV Capital managing director Hans Tung took the stage to interview one of his portfolio CEOs, Peter Szulczewski of Wish. With an increasingly boisterous crowd as their background, Tung managed to ferret out lots of fascinating information from the highly personable Szulczewski, who looked very much the part of busy founder. (Blood-shot eyes, rumpled clothing.)

We’d been eager to learn more about Wish — a fast-growing e-commerce mobile app that has raised roughly $600 million from investors — particularly because Szulczewski hasn’t talked often with the press or shared much hard information about the company. He did last week, though, including telling the crowd that Wish now has “hundreds of millions of users,” that it saw “single-digit billions of dollars” in gross merchandise volume, and seemingly confirming rumors that the company has seen interest (if not concrete acquisition offers) from Alibaba and Amazon.

If you’re interested in e-commerce or want to understand merchants in China particularly, this is a must-read.