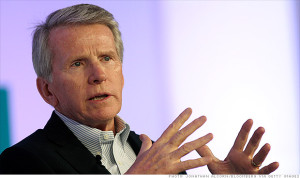 Much of Lane’s testimony centered on his handling of the complaints of both Pao and Kleiner partner Trae Vassallo, both of whom turned to Lane before anyone else at the firm to discuss former partner Ajit Nazre.

Roughly four years after that exchange, Nazre showed up in Vassallo’s hotel doorway during a work trip wearing a bathrobe and slippers. Vassallo – married with children — also went to Lane before talking with anyone else at the firm.

Lane wrote back that, “I really believe ‘stuff happens’ and both of you are terrific people. . . . this should not be offset by common human behavior. No bridges were burned, mistakes were made, apologies offered, and it’s up to us to move forward, and not shoot ourselves in both feet.” He also encouraged Pao and Nazre to “talk about working together [and moving] forward . . . you both have enormous mutual respect, despite any personal liabilities.”

Perhaps unsurprisingly, Kleiner’s attorney, Hermle, tried steering Lane to the larger point of whether or not Pao should have received the promotion that Pao is arguing she deserved. Toward that end, Hermle pulled up two emails relating to different CEOs who expressed displeasure in working with Pao.