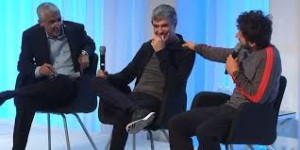 Page and Brin come across as charming in different but complementary ways. Page plays the straight man, responding earnestly to Khosla’s questions about Google’s priorities. “I guess we feel that, right now . . . the actual amount of knowledge you get out of your computer versus the amount of time you spend is still pretty bad. And I think our job is to solve that,” he says.

Meanwhile, Brin is like the smart-alecky brother who cracks wise at Page’s expense. When Khosla asks the founders about machine learning, Brin drapes an arm around Page, saying, “Well, look, this is our latest model right here. See? Not perfect yet but doing pretty well.” The crowd bursts into laughter as Page buries his face in his hands. (We also laughed, watching it online.)

For all the founders’ endearing chemistry, the interview is far from a public relations coup for Google,  whose gleaming private buses sparked San Francisco’s so-called “culture wars” last winter. In fact, the video might serve as further evidence that Google’s CEO and co-founder doesn’t think very much of the growing wealth disparity between tech workers and everyone else.

Consider Page’s response when Khosla somewhat timidly asks him about “short-term issues like you see in San Francisco,” such as “people not appreciating that people who are part of the ideas economy … are doing much better than people who aren’t.” Page might have used the question to assert Google’s interest in being a good corporate citizen. Instead, he effectively dismisses the idea that Google has any responsibility for San Francisco’s growing divide between rich and poor.

“This kind of thing is really a governance problem,” says Page, “because we’re building lots of jobs, lots of office buildings, and no housing. So it’s not surprising that [has] caused a lot of issues. You also have a lot of people who are rent controlled, so they don’t participate in the economic increase in housing prices. It actually hurts them. It doesn’t help them. So I think those problems are more structural and very serious problems. We’re not really on a path to fix those problems in this area.”

Page sounds more tone deaf when Khosla asks him about the consequences of machines replacing human jobs. “If you really think about the things that you need to make yourself happy – housing, security, opportunities for your kids – anthropologists have been identifying these things — it’s not that hard for us to provide those things,” he tells Khosla. “The amount of resources we need to do that, the amount of work that actually needs to go into that is pretty small. I’m guessing less than 1 percent at the moment.”

Because everyone needs to “feel like you’re needed and wanted and have something productive to do,” one solution might be to “just reduce work time.” Page adds, “Most people like working, but they’d also like to have more time with their family or to pursue their own interests. So that would be one way to deal with the problem, if you had a coordinated way to just reduce the workweek.”

Simple, right? Not exactly. Page sidesteps the economic consequences of reducing employee hours in an economy in which most people still live paycheck to paycheck. Does he expect companies to pay their employees the same amount of money for less hours? Should the government foot the difference? He doesn’t say.

Judging from the interview, Page wasn’t prepared to talk at length about social issues. After all, this wasn’t a sit-down with the Washington Post. He and Brin were being interviewed by Khosla, a fellow billionaire, at an intimate CEO summit.

But it’s probably time to ditch the platitudes of “Abundance,” a book by serial entrepreneur Peter Diamandis that describes a world in which everyone’s quality of life will continue to rise thanks to the exponential growth of technology. (“I totally believe we should be living in a time of abundance,” Page tells Khosla.)

At the very least, Page might pretend for a moment that he’s not worth $30 billion and think how his words might sound to those who are working to make ends meet and, in many cases, failing. It’s worth remembering that more than 46 million Americans are now living in poverty.

We know Brin was just joking when he said his friend Page was a robot. Now it’s time to prove it.