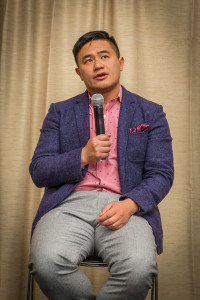 Last week, we published several interviews from our most recent StrictlyVC event in San Francisco. Today we’re running the last of those interviews, with venture capitalist Jeremy Liew.

Liew joined Lightspeed Venture Partners in 2006 from AOL, where he’d worked in corporate development, and as many readers will know, his star has risen quickly in the last nine years, thanks to investments like Snapchat, Bonobos, and The Honest Company. (Snapchat is reportedly valued at upwards of $20 billion and Liew wrote its first check, for $500,000. Meanwhile, both Bonobos and The Honest Company are expected to go public in the not-too-distant future.)

Liew — who primarily focuses on social media, commerce, gaming and financial services — doesn’t seem to be taking anything for granted. Parts of our chat, edited for length, follow.

Probably three-ish years ago, taking more of a quantitative approach and looking at data sources was a more of an advantage; you could spot things before other people did. I still think that it’s good to see what everybody’s seeing, and we want to do that, but oftentimes, there’s an awful lot of interesting stuff that’s not as well-known, and you have to go looking for that. Bitcoin is a good example. Now there’s a lot of coverage about it, but two or three years ago, that wasn’t the case, and you could meet every interesting Bitcoin company in the world, which then was 15 or 20 companies.

So you develop a thematic approach, then dig in?

First, just being able to observe the present without judgment [is important]. It’s easy to rush to judgment based on your intuition, but you have to recognize that your intuition can be pretty fallible before you write something off.

You also have to have a point of view that’s differentiated. Some people did around [virtual reality]; we didn’t. we missed that whole thing. But when you pick a sector early, you really can be as well-versed in that sector as anybody else.

There are some sectors, where you really have to spend time to develop a point of view. I haven’t [when it comes to VR] not because I don’t think it’s interesting but because I’ve been focused on other stuff. And I think VC is becoming more of a specialist business. If you don’t know enough about a category, entrepreneurs probably figure that out pretty quickly.

You’ve said that you think L.A. is more in touch with what the rest of the country wants than Silicon Valley. How much time do you spend there?

I have one board seat in the Bay Area, five in L.A and five in New York. It’s not that I don’t want to invest in the Bay Area, but [I no longer believe there’s a] path that starts [here] with the digerati and that spreads to everyone else as they slowly grow to understand what we’ve always known. Instead, it’s actually young women who are the carriers of cultural viruses; it’s young women who are early adopters who will evangelize technologies and help spread them. And you ask yourself: who understands what young women in middle America will be doing, people in Silicon Valley or people in L.A. and New York?

One of your biggest L.A.-based bets is on Snapchat. For those who don’t know, how did that deal come together?

It was in 2012. It’s a lucky thing. One of my partners has a daughter who, at the time, was in high school. He’s an engaged dad and he noticed she was using this new app all the time, and [asked about it]. She said everybody in school has three apps: Instagram, Angry Birds, and Snapchat. (Remember, it was 2012, so people were still playing Angry Birds.)

He mentioned it to me since I focus on consumer stuff, so I downloaded the app, and I really didn’t understand what the big deal was [but figured if a] subset of people are using something intensively, it’s worth understanding why. So I saw [an email address] on Snapchat’s site and I emailed it and never heard back. I [turned to] LinkedIn and no one was listed as an employee at Snapchat. [Eventually] I turned to a WhoIs [domain] lookup [and it listed] Evan Spiegel, who was a sophomore at Stanford, so I emailed him through LinkedIn and never heard back. Then I started randomly emailing [different possible gmail addresses for him] and didn’t hear back. I was about to give up but tried one last thing. Since Evan was a Stanford student and I was a Stanford grad from business school, we were in the same Facebook [group], so I direct messaged him. And I heard back from him one second later, and he said, “Oh, I’d love to talk with you.” [Laughs.]

He wandered over the next day, cracked open his Mixpanel [mobile analytics] account and I was shocked by the engagement, retention and growth . . . It was growing so fast that he said, “We can’t pay our server bills,” and we said, “We can help you with that!”

Reports say Snapchat is now worth $10 billion to $20 billion. What do you think it’s worth right now?

Have you taken some of your money off the table?

We haven’t. Venture is a game of extremes. You aren’t successful because you have a high hit rate; you’re successful because of your best deals. So you have to ride out your winners. If Evan and the team think there’s opportunity here, then we do, too.

You’ve also backed the anonymous app Whisper, whose most direct competitor, Secret, just went out of business, while another, Yik Yak, seems to chugging along. Has your view on anonymous apps evolved in any way?

With Whisper or Yik Yak, you actually get very different things. Yik Yak is very geographically focused. Whisper is much more about topic. You can connect with and emphasize with others about being gay in high school, or around loving your kids but sometimes just needing to be by yourself a little bit. Whatever it is, you’re not sure who you talk with about some of that stuff, and this gives you a forum to do that.

That’s the upside of anonymity. The downside is bullying or just mean-spiritedness. One of the few tools you have with these social sites is the culture within the community. If you go to an app where everybody else is ragging on other people, then it’s you think it’s okay to do that. If you go to an app where everyone is empathetic and supportive, then you say, okay, that’s kind of what we do here. Think of Pinterest, which essentially started as a photo sharing site. Users could have posted [lewd] pictures but they didn’t because they could see no one else did. You’d have to be a real jackass to think [behaving badly] is a cool thing to do when other people aren’t doing that, and most people aren’t real jackasses.

What did you make of Secret’s end? People seemed upset that the founders had taken $6 million off the table in the Series B, but no one was holding a gun to investors’ heads when they struck that deal with them.

I think in every transaction, a willing buyer meets a willing seller, and they agree on terms. The outcome there was probably what nobody was planning for but that happens in entrepreneurship and startups.

When is the right time for founder liquidity?

There’s no universal answer. Sometimes, investors want to own more than they’re able to. That’s probably not a great reason, but that’s actually one key reason, and it’s what I suspect happened in Secret’s case. Other times, it’s about alignment. Maybe you have founders who were in college two years ago and there’s an opportunity for the company to sell for $100 million. It must be pretty tempting to have a life-changing moment, and having the founders aligned with investors in wanting to go for a bigger opportunity is a good reason for founders to take money off the table. In any event, it’s a rare thing. It shouldn’t be a standard thing.