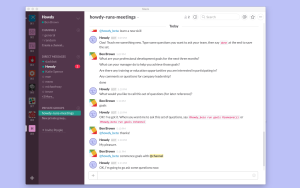 Despite a checkered history with online platforms, developers are always looking for the next big distribution model and a small but growing number is betting Slack, the popular group-messaging platform, is the way to go.

One such startup, Austin-based Howdy, may be the first to nab venture funding based largely on that vision. Specifically, the company, which has developed a customizable chat bot application that runs automated tasks for teams on Slack, has just nabbed $1.5 million in venture funding from Bloomberg Beta, True Ventures, a small angel group called Outlier and numerous individual investors.

Howdy is first and foremost a time saver for now, especially when it comes to meetings. For example, after connecting to Slack, the app can simultaneously message each member of a team, collecting status updates that can be archived and viewed by everyone. The idea: to keep meetings from turning into one long catch-up session and enabling attendees to focus on decision-making instead. (Worth noting: Howdy can also be used to collect everyone’s lunch orders. It’s up to the team using it.)

Howdy co-founder Ben Brown says the still-in-beta company will eventually charge customers on a monthly basis but that it’s a “little early to know the details.” What he says he does know is that providing applications, content and services via messaging applications is becoming a “huge opportunity.”