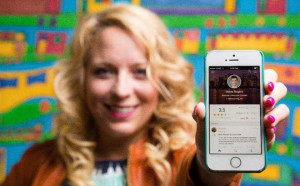 “Imagine every positive and ugly opinion about you— from your mother to that awkward co-worker you rejected at the company Christmas party— centrally located on one online profile. Sound scary? It is.”

That’s the way people are characterizing Peeple, a year-and-a-half-year-old, Calgary-based company whose app is currently being beta tested by 35,000 people yet has garnered an almost endless stream of publicity since being described last week in the Washington Post as “terrifying.”

Peeple lets people rate other people on a scale of one to five stars, as well as to write a review explaining the rating. But it’s not the first outfit to take a swing at encouraging people to present a picture of other people. In fact, that quote above? It was written by former TechCrunch writer Evelyn Rusli in a 2010 review of a similar app called Unvarnished that also used a five-star rating system and invited people to explain the rating.

You may not remember it, because Unvarnished didn’t work, and its path strongly suggests that Peeple may head in the same direction.

Let’s start with what went wrong at Unvarnished, which, like Peeple, was widely vilified in the press at its launch — so much so that it changed its name to Honestly six months after its public debut.

Honestly co-founder Pete Kazanjy — who later remodeled the San Francisco company into a recruiting startup called TalentBin and sold it to Monster  — says Honestly ran into a number of obstacles in its attempt to become an enduring reputation management site.

First, as you might imagine, there’s was a disconnect between the people who were being rated and the users who were doing the rating (anonymously, it should be mentioned).