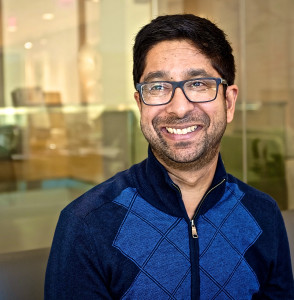 Andreessen Horowitz is making a big move into biotech, and it’s using a $200 million new fund called the AH Bio Fund – and new general partner, Vijay Pande — to plant its stake in the ground.

The fund will be used to invest in mostly early-stage startups at the intersection of computer science and life sciences. It’s the first sector-focused fund for Andreessen Horowitz, which is halfway through its main fund, a $1.5 billion vehicle that it announced in March of last year.

Pande seems a good choice to lead it. He has the know-how and the connections, having spent the last 16 years teaching chemistry, structural biology and computer science at Stanford University, where he says he’ll continue “spending a very small percentage of my time” with his research group there.

Pande also knows startups, having been involved in a number of them already. Last year, he cofounded Globavir, a seed-funded infectious disease company. Pande also founded Folding@home, a now 16-year-old distributed computing project for disease research that remains his highest-profile work to date.

Asked if it will be hard to say no to some of the many Stanford-related startups now working on health care-focused, machine-learning startups, Pande calls it a “kid in a candy store” issue, adding that he expects to “see a lot [of startups] from Stanford, Berkeley, and M.I.T.,” among other places. (Conveniently, he notes, he has spent time at all three. He was once a Miller Fellow at U.C. Berkeley and nabbed his PhD in physics from M.I.T.)

Andreessen Horowitz is quick to note that Pande won’t be making decisions about what to fund on his own.